Nate is a typical teen. Chores to do. 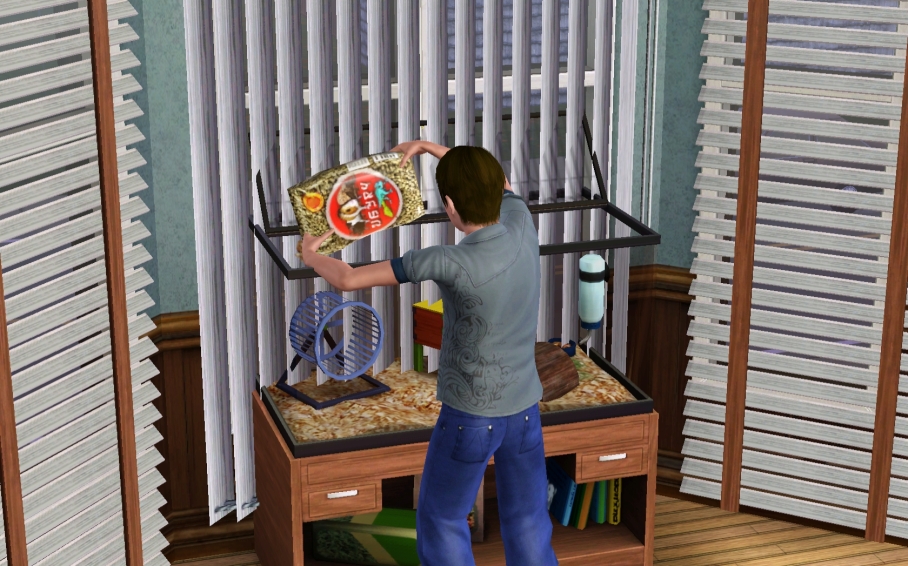 School and homework, too.

A classmate rode the bus home with him one day. It was Kristy Broke.
Addy’s Note: You might recall mention of Kristy & her sister, Malissa, in an earlier story. These two girls would either not come over after being invited or if they did… would leave almost immediately upon arrival. I felt bad for Nate.

Alice was briefly introduced to Kristy, but realized that the two were in a world of their own. That’s teens for you.

Yes, Mom! They did their homework.

They obviously had no trouble chatting and furthering their friendship because Kristy stayed rather late.

Soon the school hallways were covered with posters for prom. Nate asked Kristy if she would go with him and she said yes.

Lynda SP-Bagley gave birth to a baby girl named Renae and Alice stopped by to meet the newest addition to the Snyder clan.

Lynda wanted to talk about the rainy weather and both moms hoped that it wouldn’t dampen the enthusiasm of the students as that very night is…
PROM NIGHT!

What a fine gentleman Nate is turning out to be. He handed Kristy an umbrella for the walk from house to car. 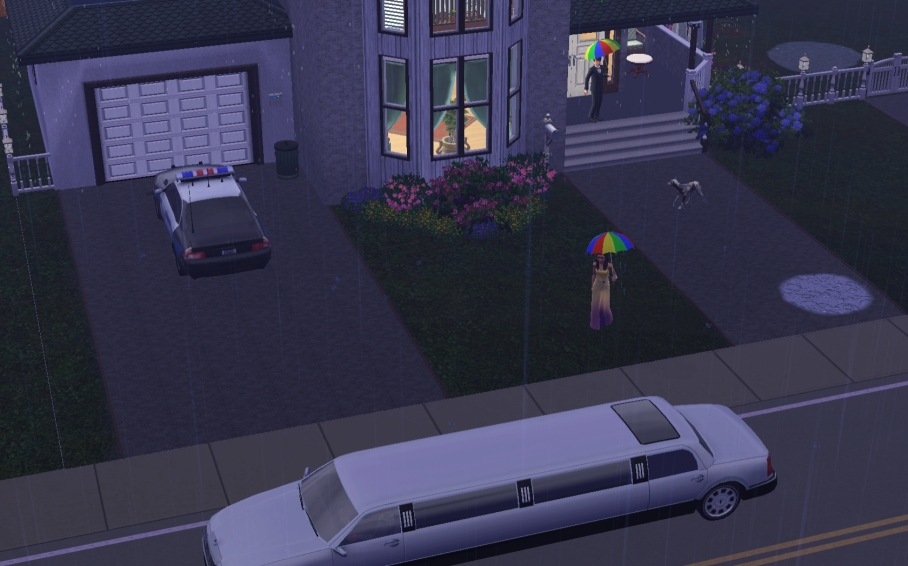 Nate was named King of the prom!

Addy’s Note: Every heir… Kayla, Reiley and now Nathan has been named King or Queen of the prom. I wonder what the other families in town must think of this obvious preferential treatment. Will the Snyder clan claim the crown each and every generation? Will there be some serious maneuvering in a future generation so this “royal family” will topple from the top spot?

Addy’s Note: Good old Story Progression is at it again! Apparently Rosie and Terrell divorced, but still share a house. Peaceful parting. No idea when they divorced but it couldn’t have been too long ago as the mod quickly forms new relationships.

Alice: “What?! The gossip grapevine is buzzing around Nate and Kristy? *listens some more* Oh, really?! People are discussing their wedding plans and trying to guess which holiday it will take place on? They just started dating. There’s no need to rush the relationship, when the timing is right they’ll both know & then and only then will the rest of us know, too!”

The phone call must have distracted Alice more than she’d care to admit because the chili con carne she made for dinner was extra spicy. Too much ghost chili! 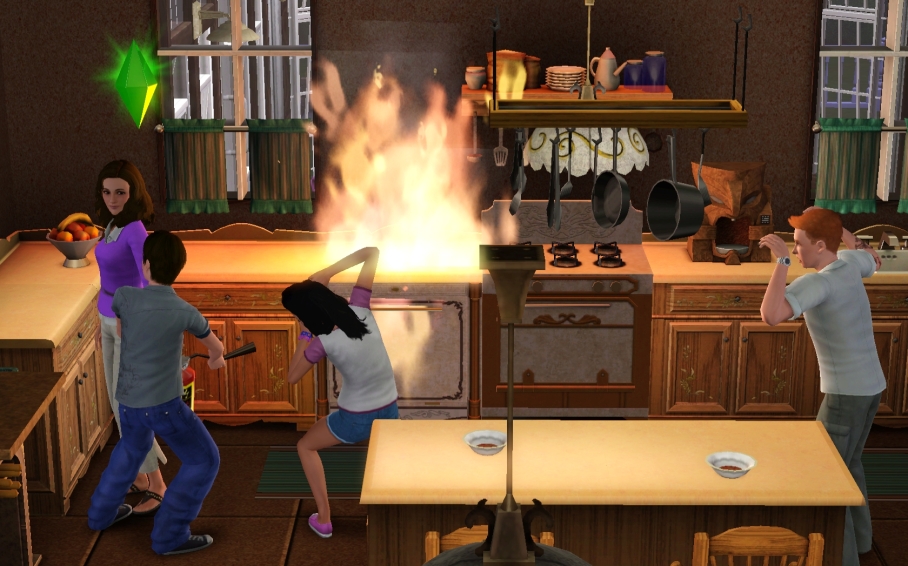 Nate to the rescue! 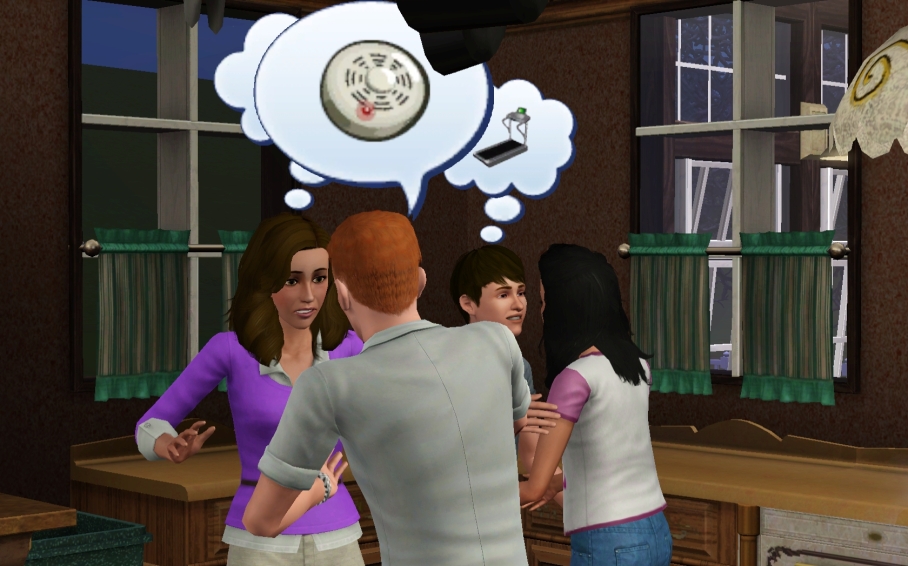 Conversation caption:
Kristy: “Nate! You were so quick to react and get the fire under control. How did you do it?”
Nate: “Well… *starts blushing*… I have been working out.”
Reiley: “I’m not sure that is what they meant by 5-alarm chili”

An embarrassed Alice scrubs the non-damaged (whew!) dishwasher until it is clean and ready to be used again.

Nate walks Kristy to the door, apologizing again for the alarm/panic caused by the small kitchen fire

Nate: “Kristy, I wouldn’t let anything harm you because you’re… *starts blushing*… special to me.”

Kristy obviously appreciates his care and concern for her well-being 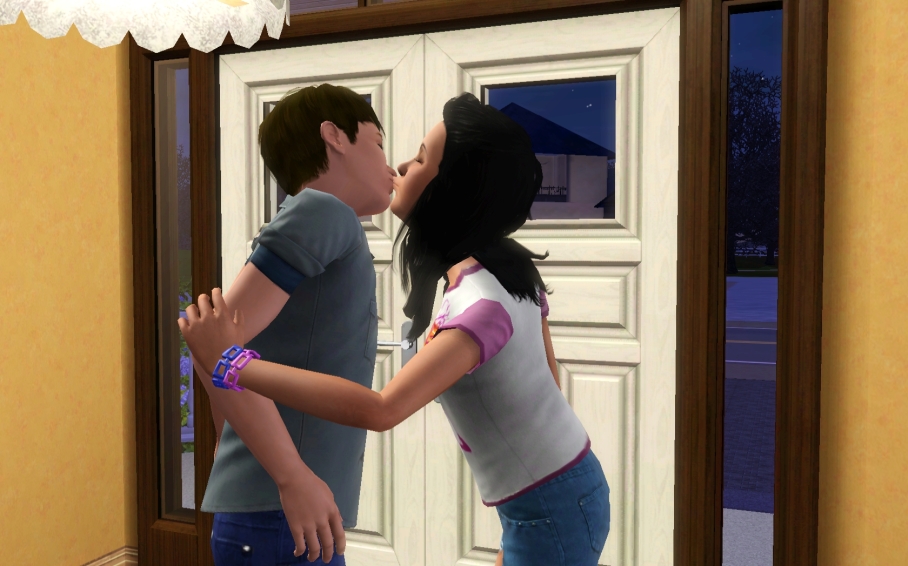 Nate is still in a daze as he gets ready for bed as there are several thoughts swirling through his mind. Kristy. The fire. Kristy. 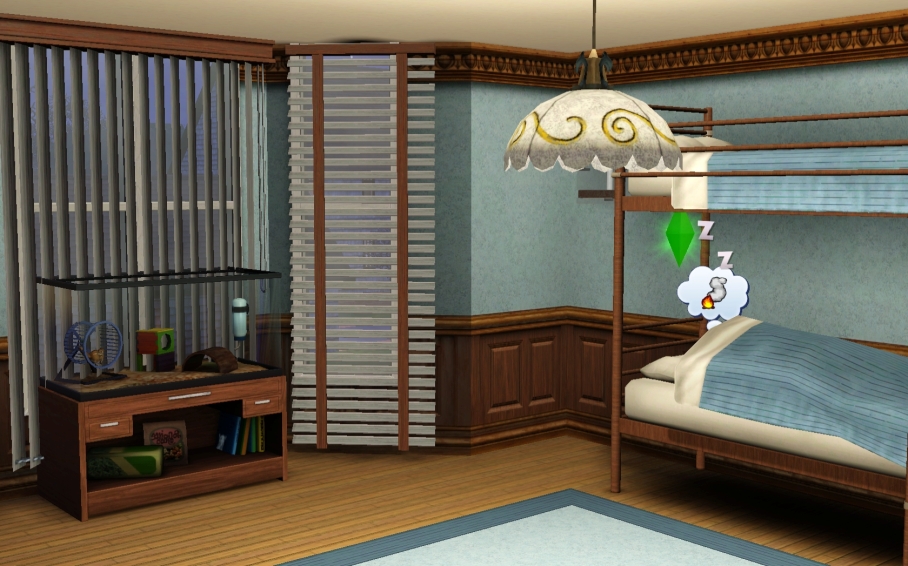 8 thoughts on “Things are Starting to Heat Up”