Winter ends. Spring begins. Nichol returns to work after an eventful few days off ~ a trip to China as well as birthdays for both Rosie and Bobby.

Maybe things will continue to go well and she’ll impress her boss with her report, resulting in an automatic promotion.
Well… a gal can certainly dream!

Her boss lets her know that the Sims of Shang Simla were honored that she took the time to speak to them.
The cabinet approved a raise as a reward for Nichol’s actions.

Then a short while later…
There is a current wave of interest in government reform and Nichol knows which way the wind is blowing.
At the hands of several deals to improve the government, Nichol has won the admiration of the people, at the small cost of overworking some of her co-workers.
She also receives a raise for a job well done!

Addy’s Note: I think this is the 1st time I have seen two raises happen in the same workday!

Dreams do come true! After a long busy day, Nichol gets the good news that she has earned that promotion and is now a Leader of the Free World.

She spots Nikki & Johnnie hanging about outside her office. Bobby is once again not with them. Sigh. Nichol had shared her opinion in regards to this topic and obviously there is nothing more she can do. Sighs again.

Johnnie stopped staring at the brick wall and turned to wave at Nichol.

“Just smile and wave back as you head towards your car and the driver waiting for you,” Nichol thinks to herself.

Addy’s Note: He is so creepy. Didn’t have an issue before he turned Elder, but now he frequently sends Kayla love letters. What makes matters worse is that he obviously cares deeply for Nikki, but has no issue with flirting with her sister or mother. That is just plain icky!

Neither Johnnie nor Nikki seemed to be waiting for her so Nichol slid into her seat and buckled up. 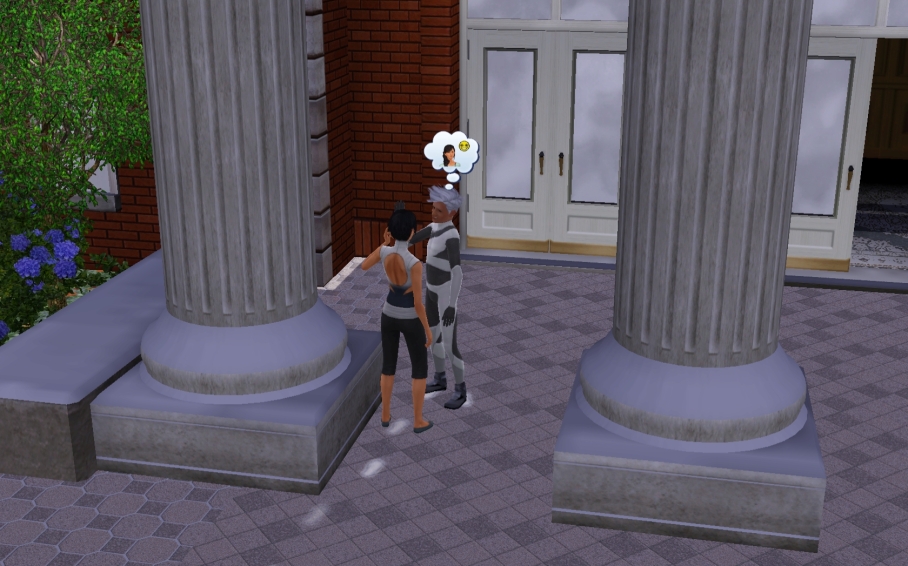 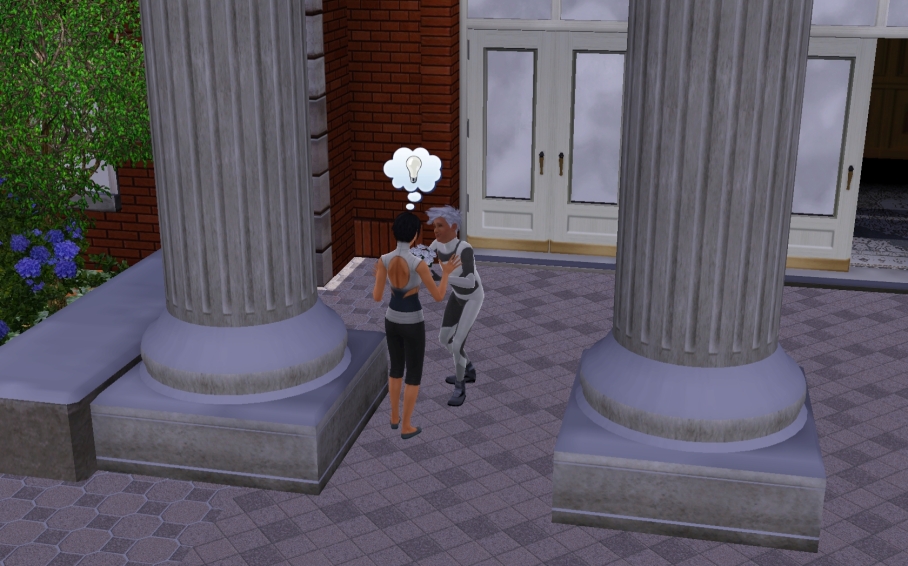 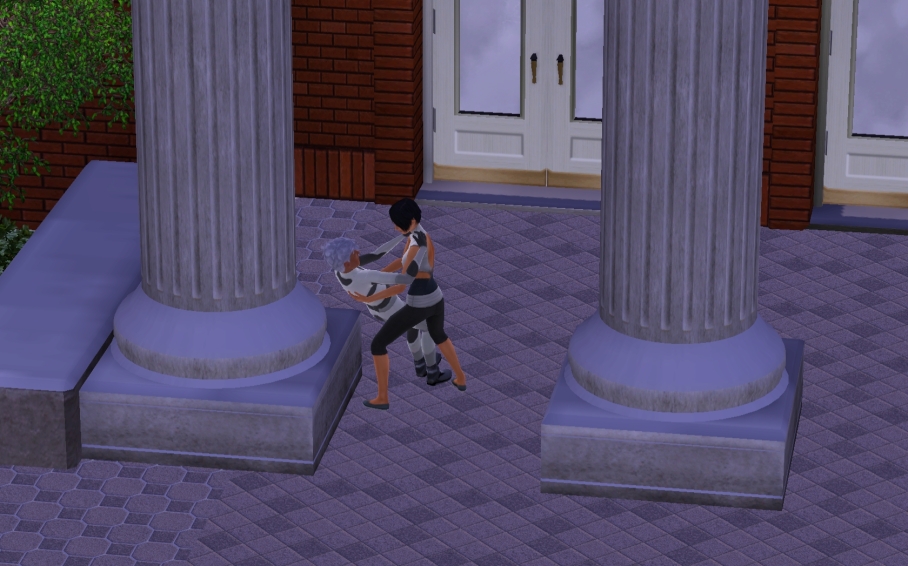 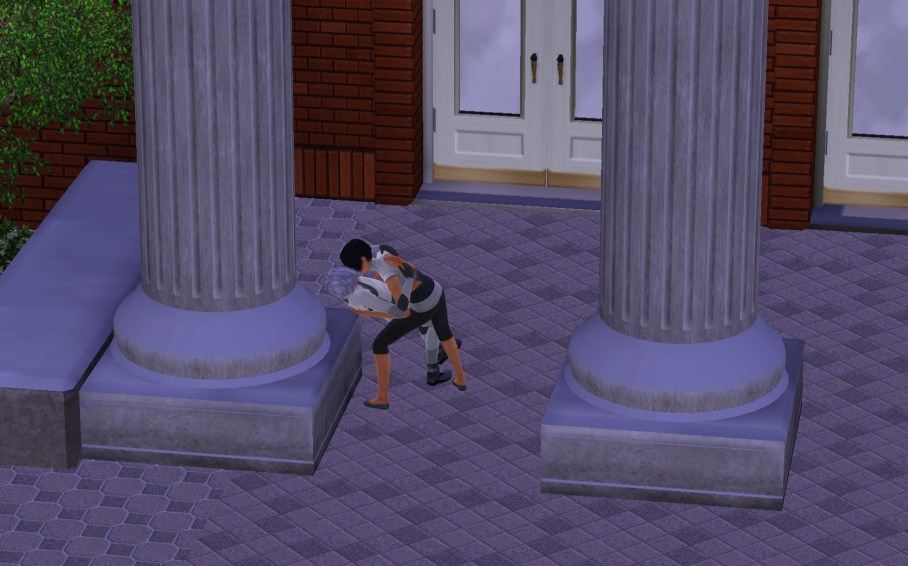 Nichol arrives home and takes a few minutes to relax & unwind.
Zach comes in to watch and quietly asks if she got the promotion. She smiles and nods.

Zach: “Let’s go to the Bistro after dinner and celebrate with a special dessert, just you and me.”
Nichol: “That sounds lovely!”

During the car ride Nichol lets Zach know that she saw Nikki and Johnnie, but no Bobby. Zach gently responded to her concerns and frustrations with, “Honey, I know it bothers you… heck it bothers me too, but Nikki and Johnnie haven’t been visited by Social Services. Trust me. With all the gossip that goes on in this town, we’d surely hear about it. Bobby might not be raised the way we wish, but we aren’t in control of what they do or don’t do. They’re grown up, living on their own and directing their own actions. We love them and want the best for all of them, but we have to let them make their own decisions and be held accountable for them. They know our opinion already so we continue to do what we have always done… call, try to visit or invite them over, and keep the relationship active so we aren’t acting like distant friends or worse whenever our paths cross.”

After a few minutes of silence as she truly listened to what Zach had said, Nichol smiled and replied, “You’re right. I might not like it, but being able to see them is much better than the alternative you pointed out. Who knows? Maybe our grandchildren will become best friends and we’ll see all three of them working on homework at the dining table or running around and playing tag.”
(Nichol looks out the window)
“Oh! The Bistro is beautiful and has such a lovely outdoor seating area, but unfortunately it’s too chilly to be outside for long. Maybe we can return for a second visit when the weather is nicer,” she says with a sly smile as she grabs Zach’s hand and leads them toward the inside seating.

Once seated at a lovely corner table with a pretty view, they chat about their various careers and what they should do next… 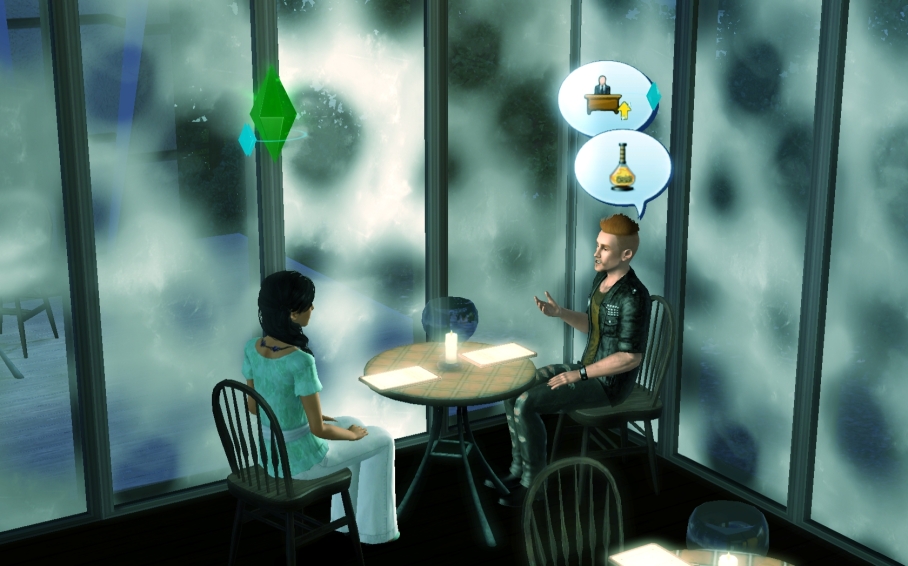 … decide what they’d like to have and place their order… 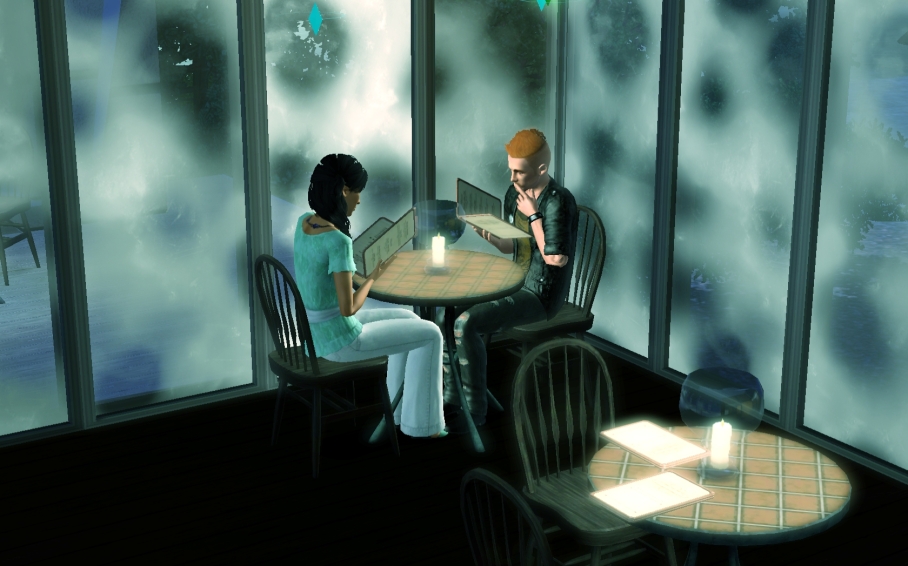 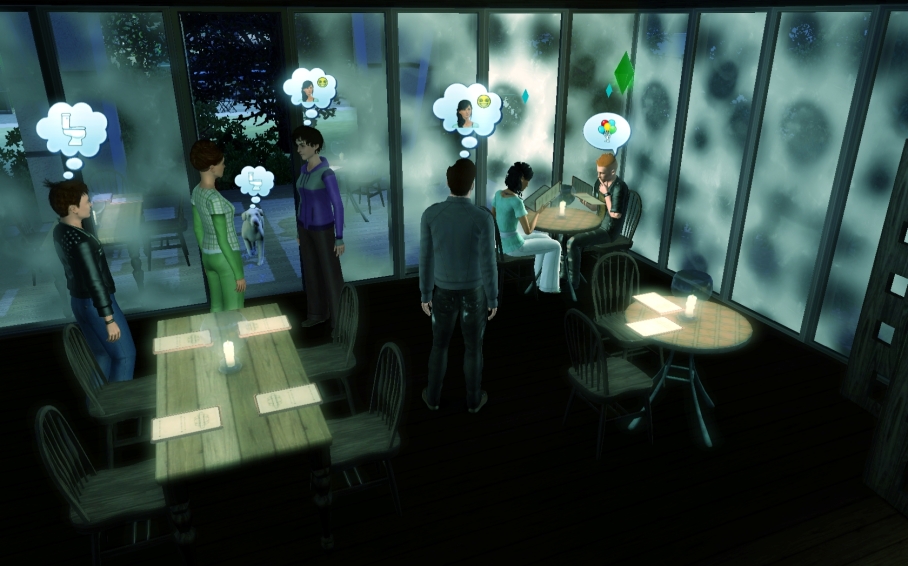 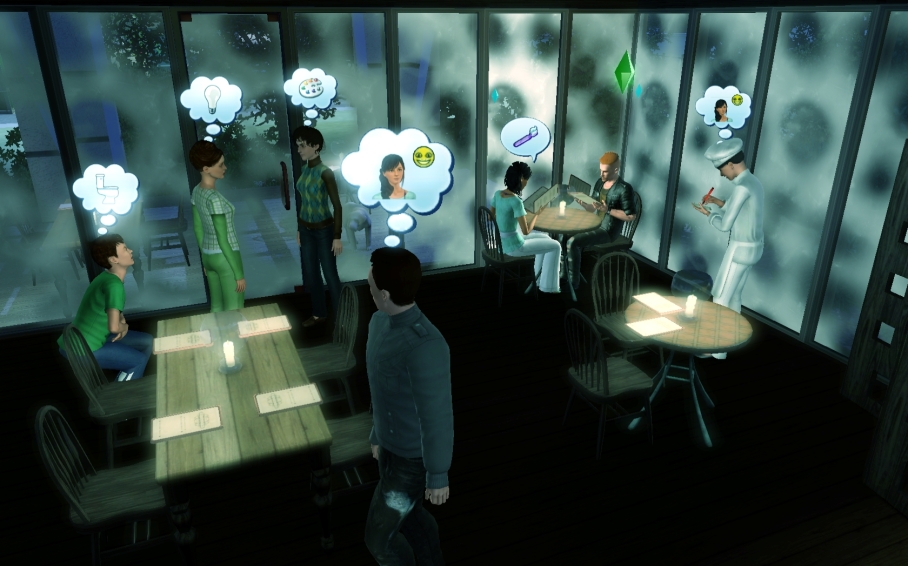 They continue to chat while waiting for their order, when suddenly Nichol stands up…

Addy’s Note: All of a sudden the action in her queue cancels and when I saw the thought bubble over her head, I honestly wondered why she would stop waiting for food to go talk to some random guy. The queue item also canceled in Zach’s, too. Odd. Then it dawned on me what I had forgotten in my excitement over the promotion, LOL 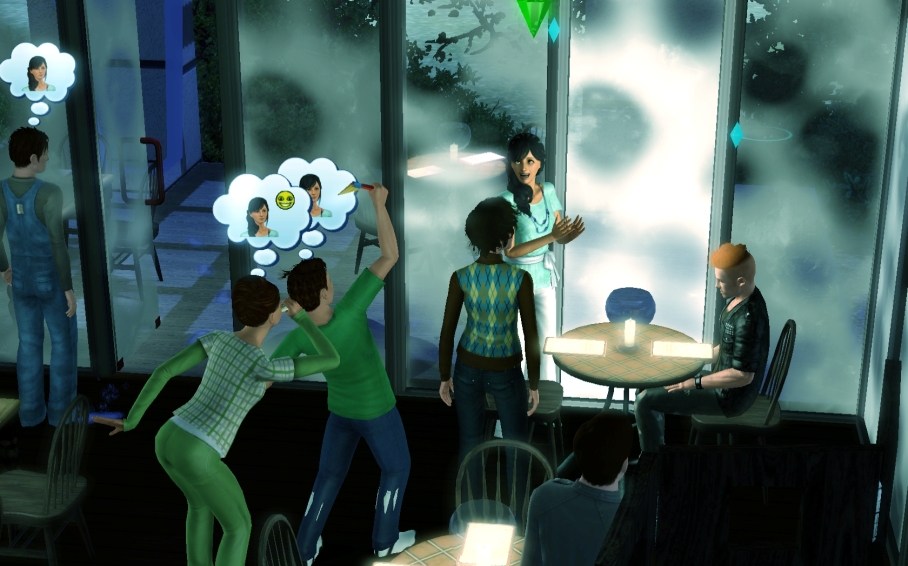 The “main attraction” is over, time to order dessert (again!)… 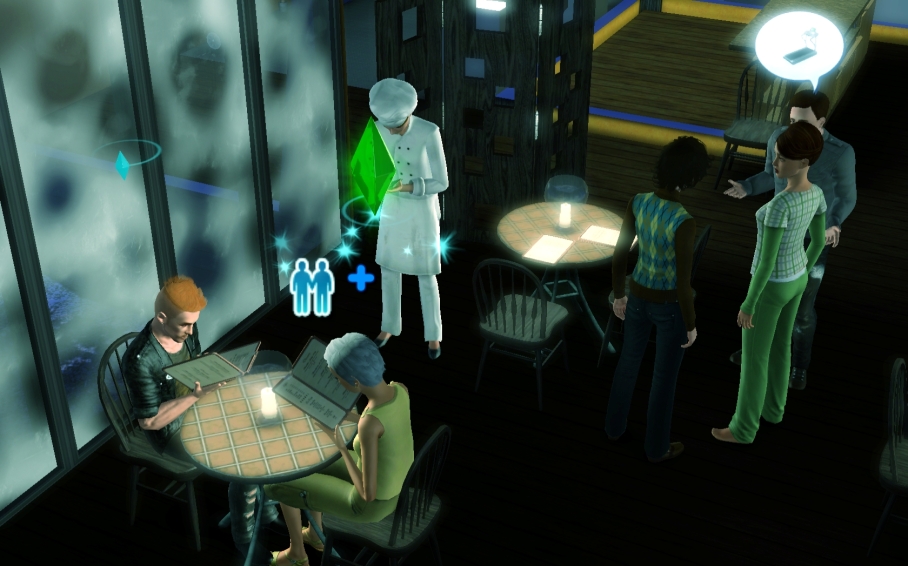 … and it arrives without any further interruptions! 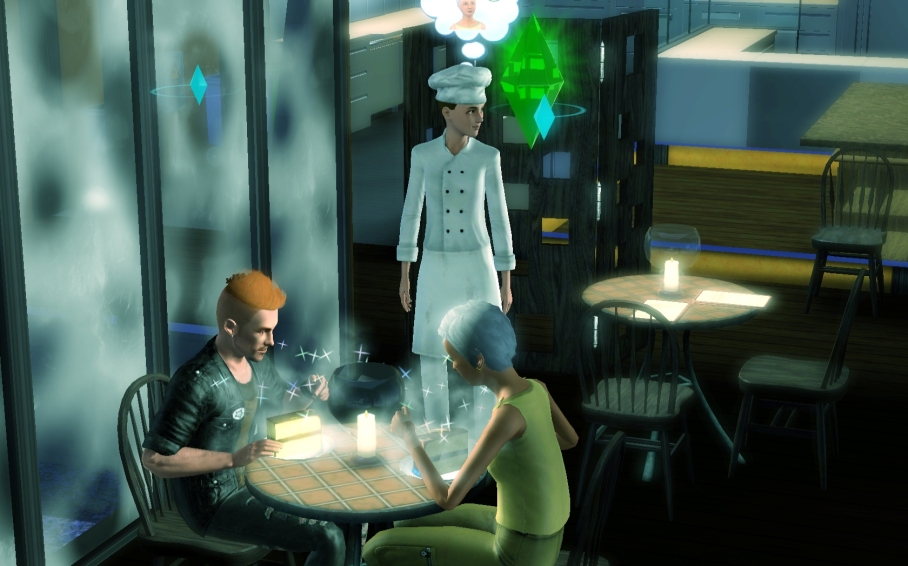 Zach and Nichol discuss whether or not they should retire or continue to work.

Zach: “Our salaries are nice, but it would break my heart knowing that I was too busy working instead of spending time with you.
There are so many things that we haven’t done and places we haven’t visited.”

Nichol quickly pulls him in for a hug and whispers, “You silly man! I adore you and don’t need to do things and go places. By your side and surrounded by our family is exactly where I wish to be!”

Addy’s Note: See the message pop up in the upper right corner? Surprise! Apparently this was Nikki’s Birthday, too! Another set of shared birthdays in the family.

After they return home, Nichol politely excuses herself and goes and takes a good long look at herself. “Not bad. With this shorter, easier hairstyle I look calm and casual… ready to face anything that SimLife tosses my way!”

Previous: Rosie’s Birthday and Bobby, too!
Next: Zombies! LTWs! and Birthdays! Oh, My!!!