So much has happened since we last spoke. Tom got married! Vanessa is wonderful and I’m really happy for both of them.

Uncle Luke took us to Champs Les Sims for the wedding. How awesome is that?!

France is really beautiful and the locals are so friendly and relaxed, you can tell that they love life!

The landscapes and museum are really inspiring! I wished I had brought a portable easel or at least a sketchbook. Maybe a camera would be better. I could then have an image for reference when painting instead of lugging painting supplies around when I travel.

I really want to travel again! France for sure but China and Egypt also sound intriguing. I’ve heard that Egypt has amazing deals on cameras.

Enough about that. I have more serious matters to talk about.

When I first met him, I was a child and quickly grew infatuated with Tom’s friend. That crush became something more when he returned my interest when we met again in the halls at high school. It was really exciting having an older boyfriend and I felt so grown up.

How little did I know! Older boys are ready for more than mere handholding and the occasional kissing session.

I’m attracted to him and think it could be love I’m feeling, but instead of being filled with joy I feel confusion most of the time. That and anger for when he doesn’t take my conversations seriously. Kissing me senseless makes my heart pound and my senses reel but it pisses me off that he thinks it’s okay to distract my attention this way.

Couples talk. Couples share their hopes and dreams. Couples should want similar things in life or they won’t be together for long because jealousy and envy or wandering eyes enter the picture.

Yes, you heard correctly. Wandering eyes. David let me know that Ethan had been seen flirting with Chantrelle, his stepsister.

Say what?! Ethan wasn’t returning my text messages because he was too busy flirting with someone else … that makes me so MAD!! And hurt.

That wasn’t the only Ethan bomb dropped during this trip.

Tom told me that Kanoa and Ethan are both in the criminal career. They’re crooks?! Ethan had said he wanted to be a Blog Artist when I caught him in a rare moment. It’s well known that his Dad dislikes him so why would those two ever work together?

It was time for me to get to the bottom of things and find out for myself instead of relying on second and third-hand knowledge.

I asked Ethan to meet me where we first met because it seemed quite appropriate.

I asked about his career and without hesitation or embarrassment, let me know he has a lucrative job at the Rustler’s Den.

“You’re a thief?” I asked.
“No, I’m no common thief. I work in acquisitions for a select clientele who are willing to pay top simoleon.”

I then asked about his giving flowers and flirting with Chantrelle. No more beating around the bush. I mentioned her by name.

“I’m not a child any longer, Abigail, and I want more than a high school no … let’s call it what it is … a middle school romance. Other sims at high school were getting more action than I did and I was the one with a girlfriend! You have a choice. Stay a child or grow up! I choose to grow up, what about you?”

“What I choose is to choose when I am ready, not when my boyfriend thinks I should be. I choose to be with a guy who respects me, respects my thoughts and is willing to listen to my hopes and dreams as well as share his. I expect both of us to be committed and faithful in our relationship!”

“Ethan, that guy is not you. It’s obvious we view being in a relationship differently. I don’t want to try to change you but I don’t agree with the choices you’re making and can’t support you in them. I’m sorry, Ethan, but this is it for us. I’m breaking up before we make each other any more miserable than we already are.”

“That’s fine with me, Abigail Casey! Run along home, little girl, before the taint of being with someone like me damages your precious reputation. I’ve listened to you blab on about your hopes and dreams long enough. Living the good life is MY dream and I’m on board with being open to opportunities that will pave my way.” 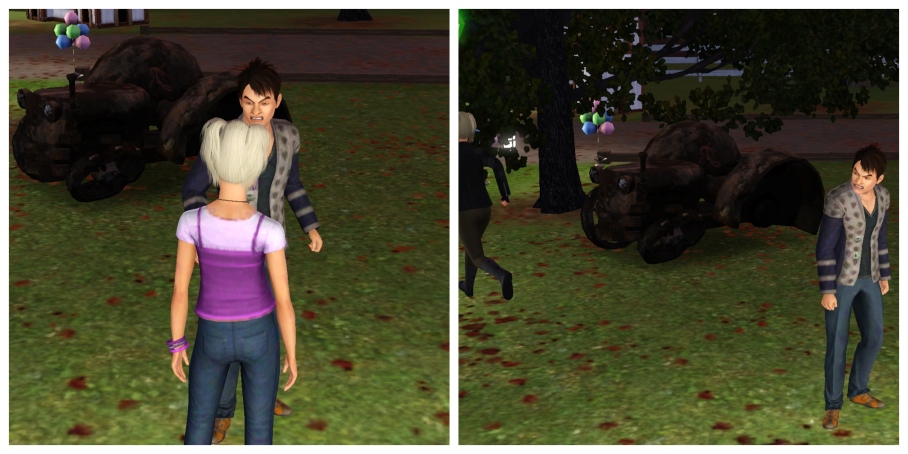 As I walked away, it felt like my heart was being ripped in two. It hurt so bad. Did I make the right decision? Could we have worked things out with both of us making some sort of compromise? I briefly looked back over my shoulder and saw through my tear-filled eyes …

No! There is no question about it. I did the right thing for me. And in time my heart will feel the same.

Love you, Mom. Love you, Dad.
I really could use a hug from you two right about now.

(Addy’s Note: I was really surprised when he did this and it goes to show that Ethan wasn’t as broken up over their breakup as he made Abigail feel that he was. Abigail didn’t get any sort of moodlet for their breakup, which I expected to see. Maybe her heart knew the truth before she did.)