Van leaves work feeling quite pleased with himself. His newest promotion results in his Lifetime Wish (Star News Anchor) getting completed.

He tells Khiara his good news and thanks her for being such a wonderful and supportive partner. 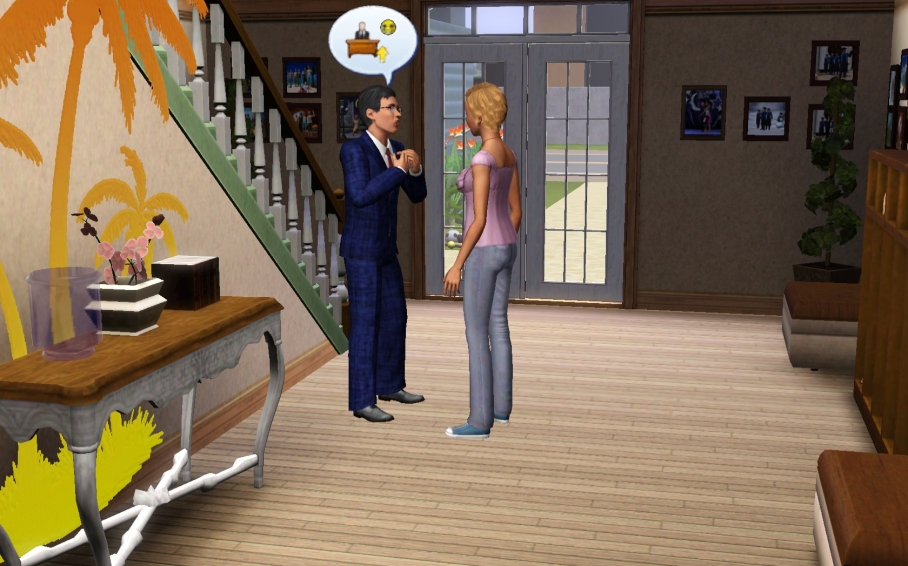 Khiara’s phone goes off with the ringtone she set for Van, so she glances down to see that he sent a text. “Got some GREAT news to share! Be home soon. XOXO”. They both have a laugh over the delayed message. 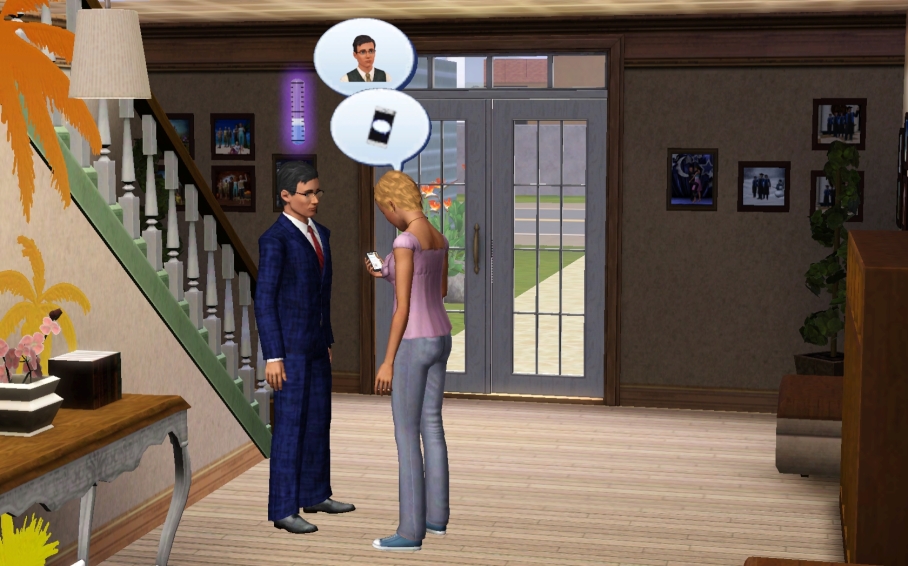 Addy’s Note: Recently, I noticed that the game had given Van a new boss after his current one retired. Khiara. How odd … considering that they aren’t even in the same career field. Perhaps boss Khiara is a doppelganger since the game sometimes duplicate sims. Van used the action “thank for his promotion” with her and sent her a text while she is standing in front of him so I’m assuming that she is indeed the boss of him. LOL This glitch might be the result of my doing a ResetSim on Van due to some routing issues he began having.

Later that evening, Khiara also has a few work-related accomplishments.

Khiara receives notice regarding two opportunities as she is heading off to work and decides to take care of them before clocking in at the hospital.

The first is an invitation to attend the Council Meeting at City Hall and give her expert opinion. Khiara manages to answer grueling questions from politicians looking to find advantages over one another.

The second is holding a seminar on the need for proper medical attentiveness both on and off the job. Khiara politely but firmly handles a bossy Sim who kept trying to correct her. Final score: Medical school 1, Amateur web searching ability 0.

Then she arrives at the hospital for what is left of her shift.

Khiara leaves work in the wee hours on Tuesday morning tired, but happy because she earned her next promotion and is now a Gene Therapist.

Ben invites Malinda over to try to smooth things over between Dad and her, but she isn’t willing to give an inch.
Addy’s Note: Van invites her, she refuses to come over. Ben calls and she is on her way. Sigh … some sims do not easily forgive and forget.

Van answers the door and things seem to go well when he tells a joke before inviting her inside. 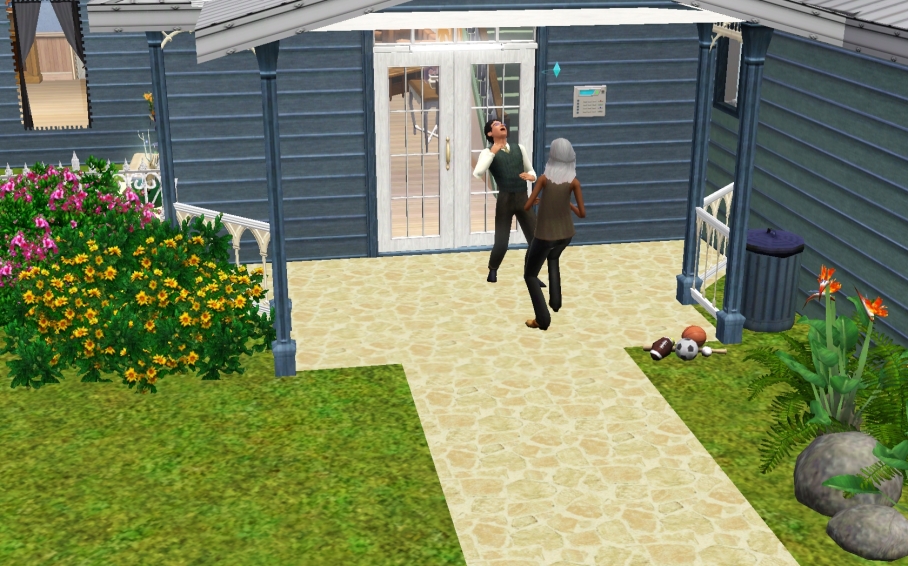 Unfortunately, the joke is on him when he tries to continue conversation inside. 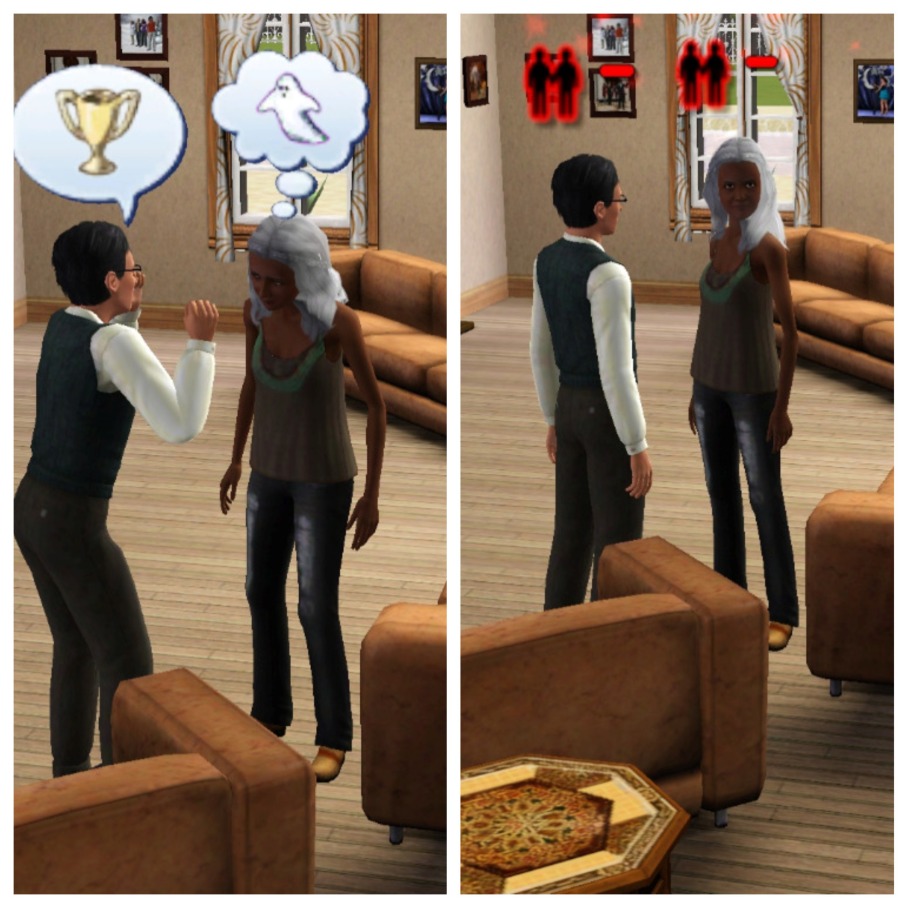 Addy’s Note: Hopefully Malinda isn’t wishing to see Van’s ghost because she will simply have to deal with being disappointed.

Van invites Malinda to join him in a game of chess, but she abruptly leaves the table with a pointed stare at baby Baz. 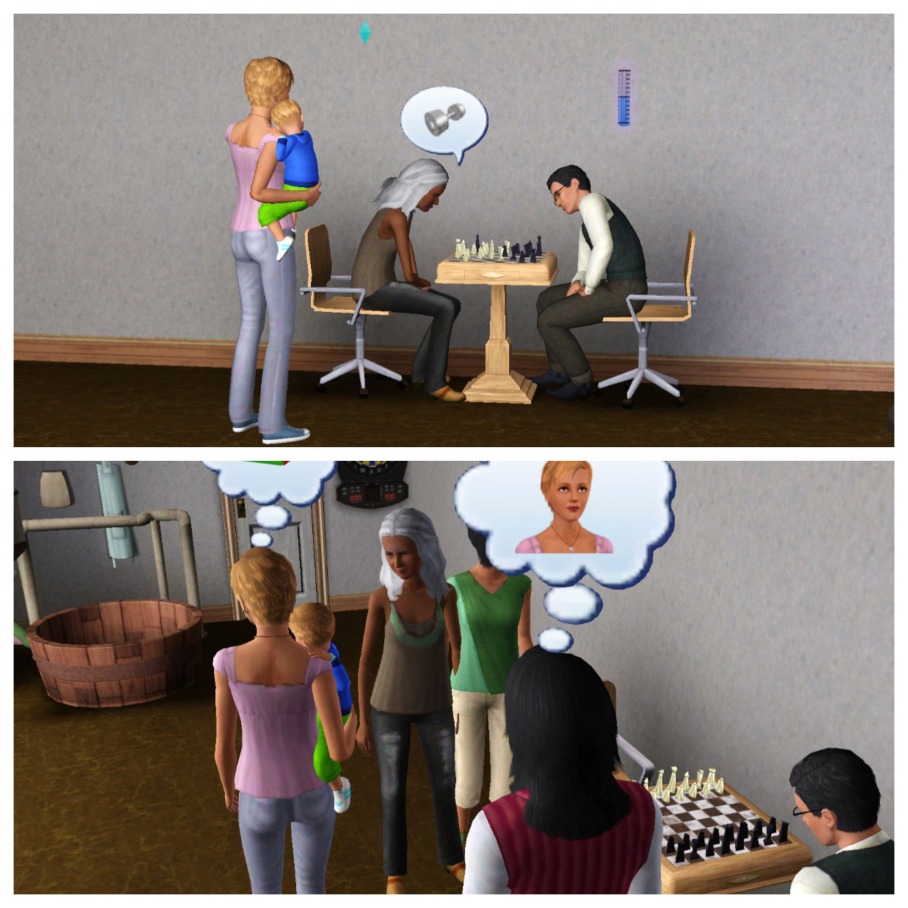 With a silent, meaningful look at Ben, Van leaves the room and Khiara follows shortly afterwards with Baz happily snuggled in her arms.

Darla steps forward to introduce herself to Malinda.

Not one to give up, Darla tries again. She strikes a chord when she asks about Malinda’s career and does her best to show interest in the topic. 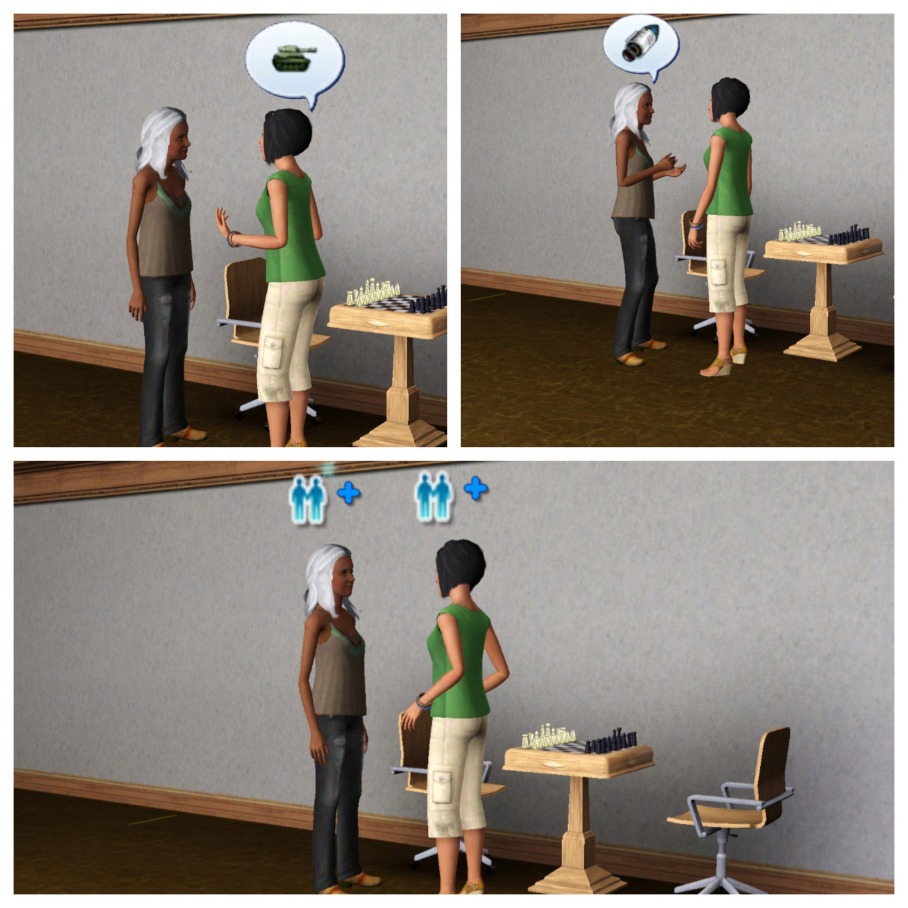 Darla knows that they have Van’s blessing to wed, but decides to ask Malinda as well. After a few tense moments, Malinda also gives her blessing … then proceeds to let Darla know that she isn’t overly fond of weddings.
Addy’s Note: Neither Van nor Darla have an easy time talking with Malinda. Conversation seems to be going smoothly and then suddenly, there are negative signs above the sims’ heads with Malinda stating that things are either awkward or boring. Sorry, Ben but I don’t think your birth mother ever plans on being an active member of your family. Thank goodness you have Van, Khiara and now Darla!

A co-worker calls to remind Van of her party and he decides a brief appearance would be just the thing to lighten his mood after dealing with Malinda.

While en route, Van suddenly pulls his car over to the curb and quickly exits. Amid the day’s events he forgot that today is his birthday. 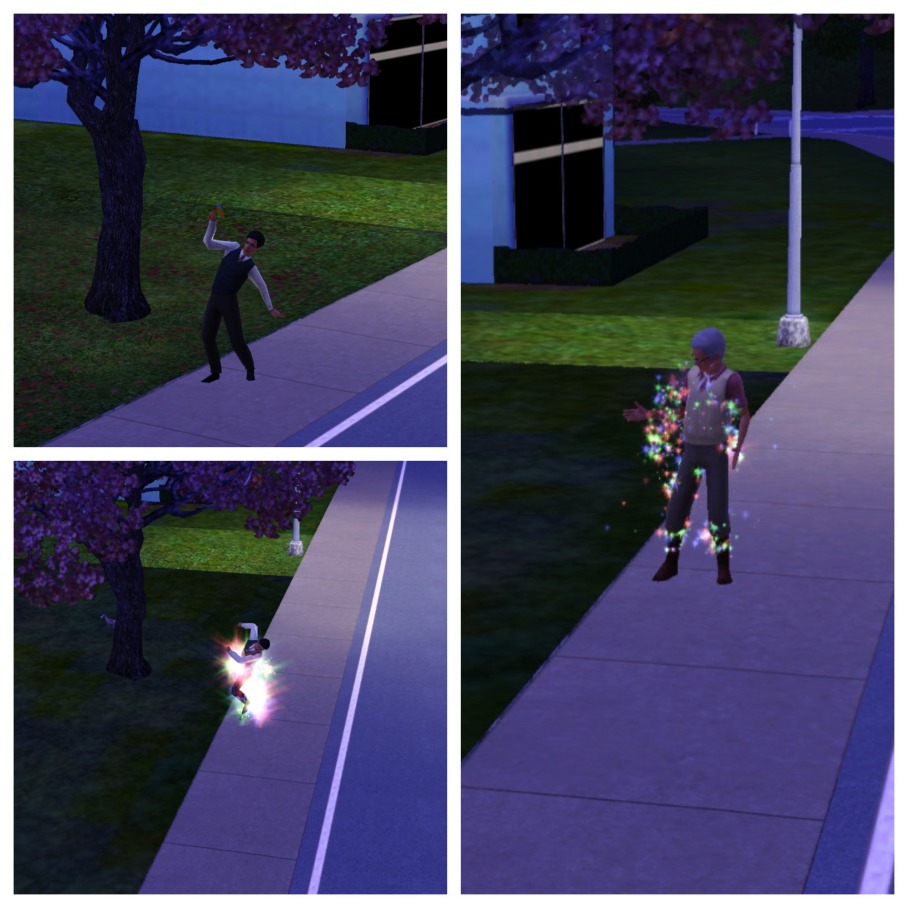 He briefly stops by Malia’s party, then heads home. 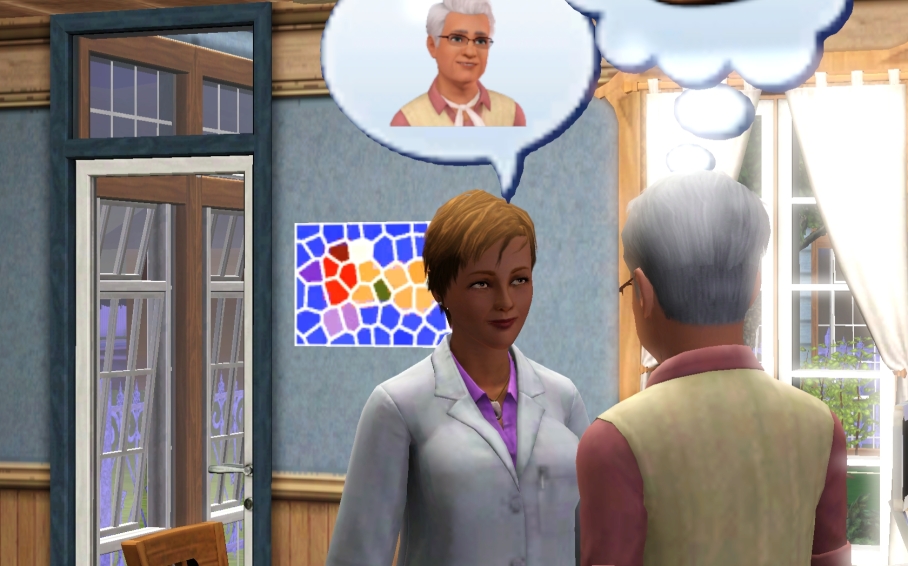 NEXT: Picnic in the Park
Previous: Something Shiny