Khiara enjoys her career but is ready to retire.

Skating at the Winter Festival is a fine way to celebrate.

So is getting a new family portrait. 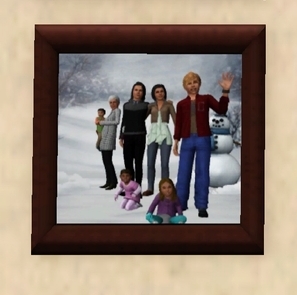 She isn’t the only one celebrating something today. Baz learns that Zoey Clements likes him as much as he likes her. 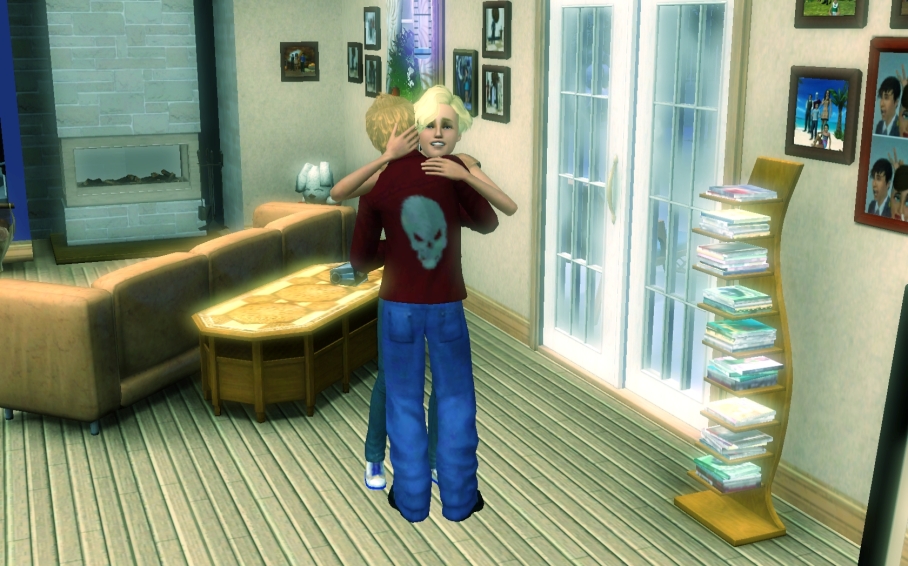 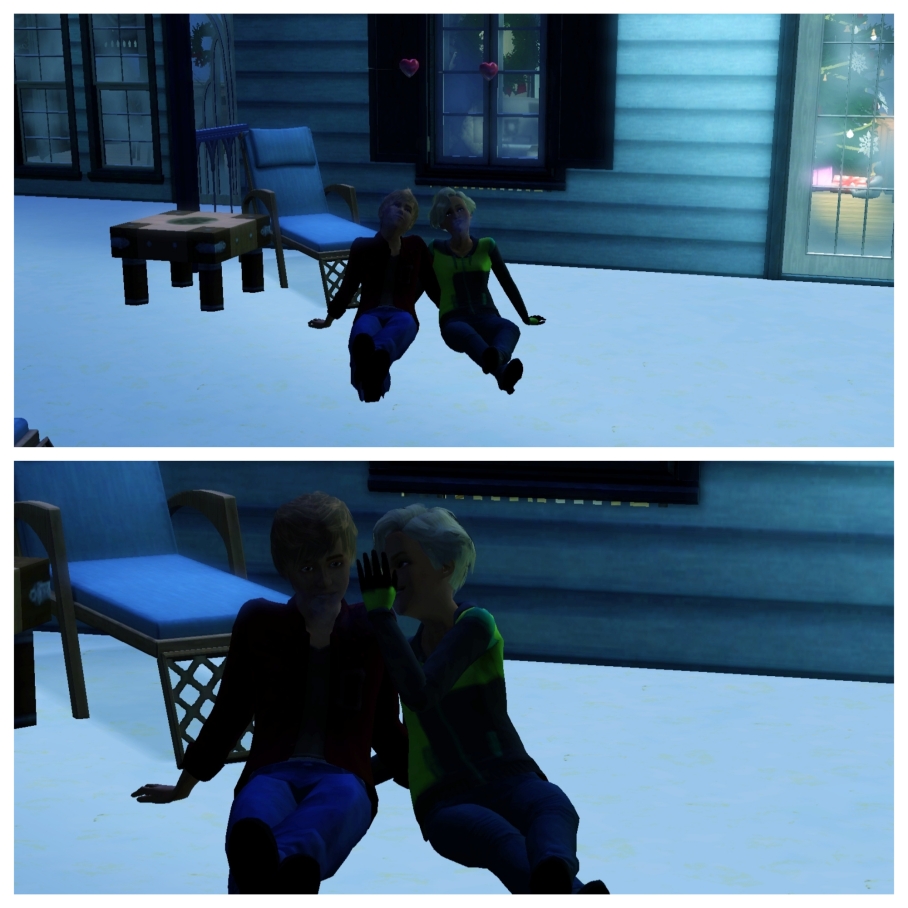 So is driving his girlfriend home at the end of their “date”.

~ Friday ~
Birthday card is sent to Ernie.
Antoine and Sue Doe get engaged.

After school, Baz goes on a date with Zoey. They aren’t ready to end their outing after the movie credits roll across the screen so these two young lovebirds head over to the park.

Grandma Khiara is upstairs playing with the kiddos so Ben and Darla take advantage of the quiet to watch the daily news. 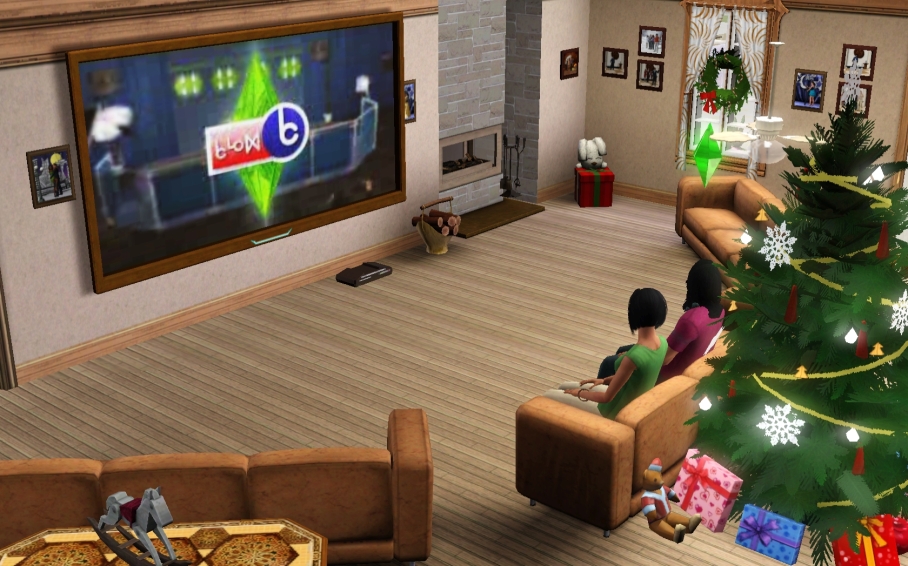 “Snow is light so school isn’t expected to close tomorrow.
The protest at City Hall against pollution ended without any muck being raked/tossed about.
The …”
At this point, Ben and Darla tune it out and began talking amongst themselves.

“We interrupt our local news with BREAKING NEWS”
Victoria Andrews reporting live on scene
“A group of Sim U students were debating science vs supernatural when things took a dire turn from verbal to physical at the annual Llama Linguistic and Philosophy Think Tank in Sunset Valley (sponsored by Fizz drinks … Fizz fuels fun!). The two groups and their working models of the Group Science Project and Weather Stone faced off in a duel to see which was better at seeding the clouds and things seemed to be fine for a while …
** the television screen shows footage of the debate and colorful clouds **

… it is unknown whether the units malfunctioned, overloaded or caused serious conflicts with one another … 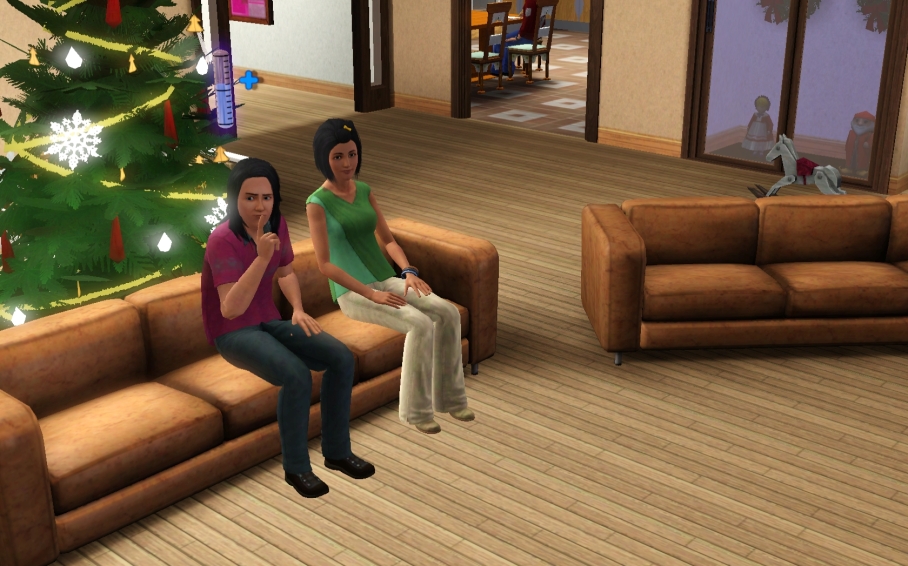 … Sunset Valley has been evacuated and placed under military protection while expert scientists and ecologists inspect the damage. All flights and cruises have been cancelled or re-routed to other destinations …”

Throughout the evening and all of Saturday, the family gathered around the television and watched the frequent updates.

“This is the Vita Alto, Mayor of Sunset Valley. It is with a heavy heart and great sadness that I must inform you about the current state of our pride and joy, Sunset Valley, a jewel in the continent’s crown. Sunset Valley is no longer a safe haven.

The ecological balance has become seriously unbalanced and sims are not allowed to return to their homes or businesses in the foreseeable future. The government emergency funds in addition to the rest of our budget are being allocated to finding new homes for these displaced sims. Most of the businesses have branches in other cities and are increasing their staffing needs to accommodate these additional workers. Thank you, neighboring cities (Vita lists all of them), for opening your arms wide in welcome.

There have been heavy losses. Homes. Businesses. Peace of mind and security has been shattered. But all of this pales in comparison to the loss of loved ones. There are sims unaccounted for and I fervently hope that these individuals were elsewhere or made it to safety before all plum broke loose. Pardon my foul language, but tough words are appropriate for tough times.
**tears are running down the Mayor’s cheeks while she holds herself together with strength of purpose and determination as she reads her carefully written speech out loud**

As each day passes and these sims aren’t heard from, their chance of survival drops. Military and law enforcement units from Twinbrook, Riverview and Bridgeport are working with Sunset Valley units to search from one end of the valley to the other. They are working round the clock to ensure that these sims will be found. This will take time.

Please be patient as these brave men and women don hazmat suits, working in intolerable toxic conditions, to find your loved ones. They will be found.

Until then focus on helping those wounded and/or displaced during this catastrophe. Donate blood at your local hospital, drop off non-perishable food and new or gently used household items at consignment store collection sites or be a host family. Sims need a place to stay while they go to work or school. Detailed information can be found online at SimNews 9 or in the newspaper.”

After the others had gone to bed, Ben and Darla continued to discuss this topic.
They considered their options on how to help and decided to buy a newspaper and get more details. 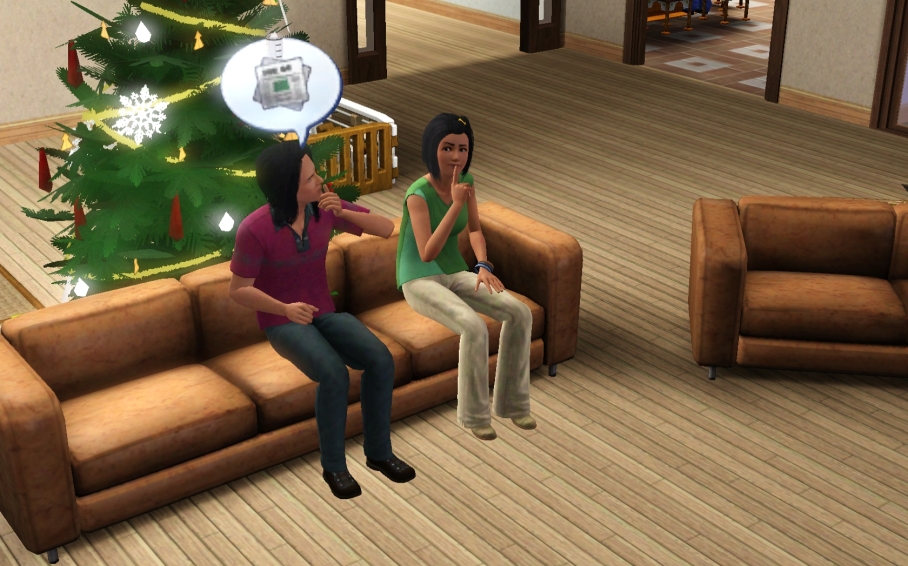