~ Wednesday ~
Antoine begins dating Shonna Nava.
Kenisha has passed on. Kylie mourns the loss of her mother.
Kylie moves in with her half-sister, Bridgette.
Luther and Malinda begin dating.
Addy’s Note: I guess they met during a bereavement support group meeting.
Adam and Sommer are having marital troubles.
Chase and Lorena are expecting their 3rd child!
Dayna and Ramin welcome their 3rd son, Kody, into the family!
Deidra and Kirk are expecting their 3rd child!
Joss begins dating Nicola Burris.
Christin celebrates a birthday!

Van arrives home from work and sees Khiara out in the greenhouse. He goes to see how she is doing and if there is anything he can do to help.

Khiara smiles and continues pulling weeds, “I’m fine. Really. I went to the park this morning and after some quiet reflection while feeding the ducks, came to the realization that being a scientist and working at the Lab isn’t something I can continue doing. A part of me would always worry whether another accident was about to happen …
** takes a calming breath **
and this is what makes me dangerous as an employee.

My fears and concerns could hinder me from putting forth my all into any research project I am a part of. My preoccupation, if you will, could lead to my doing something that might possibly trigger another accident because my mind wasn’t 100% upon what I was doing. I don’t want to live in fear of the lab room next door to me or worry that my own room is the next sleeping dragon.

I still love helping other sims so I applied for a job at the Country Care General Hospital. They have done so much for me and I would like to pay it forward by being one of the team that dedicates themselves to helping others.

Guess what? HR interviewed me and I got the job! I start on Friday and am really looking forward to it. I drove over to the Soil and Water Research Facility and turned in my resignation after a nice long talk with my supervisor. While he is sorry to see me go, it felt like he, meaning the company, were more concerned with whether I would be putting forth a lawsuit.”
Addy’s Note: After her accident, I realized that I hadn’t thought everything through regarding it. My random rolls indicated a science career for her but I felt that she wouldn’t want to return to work there. My daughter suggested the medical career and I think it will suit the detour my story has now taken. Gotta love how randomness happens!

“Van? Say something, please. Even if it’s only to tell me you think I’m being stupid for running away from a career that I really enjoyed. Well I did … until … you know.”

“Khiara, you don’t need my seal of approval. You need to do what feels right for you and only you can decide what that path that is. I am happy for you. I really am. You are going to be an awesome doctor someday.”

Addy’s Note: I goofed! I totally goofed! I was so focused on sorting things out with Khiara career-wise that I totally forgot what day it was in game. Sorry, Ben. Sorry, Bell.

As things were winding down for the night and the twins were heading off to bed, a familiar feeling came over them. 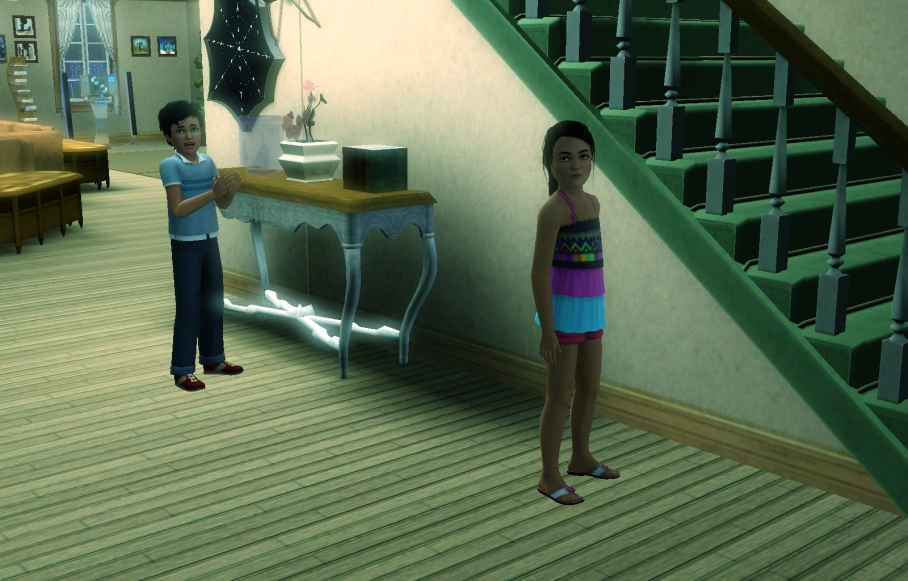 Since Ben is the eldest, birthday magic sparkles and swirls around him first. 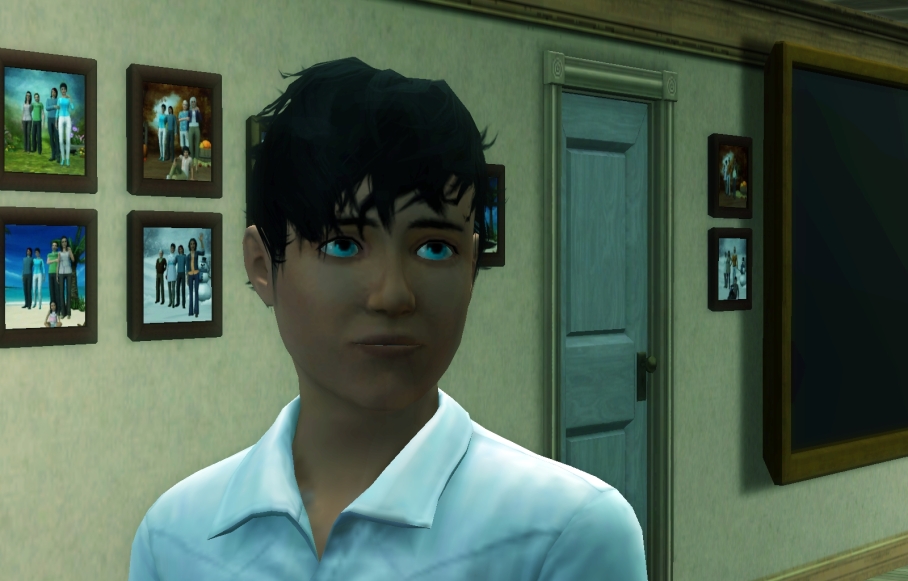 Addy’s Note: He still has that somewhat serious look to his face. His traits are Brave, Friendly, Loves the Outdoors and Vegetarian. Serious about getting fresh produce? Always alert in case he needs to lend a helping hand? Contemplating the ongoing campaign for better outdoor space at the school?

Next, it is Bell’s turn.

Addy’s Note: I don’t want to ignore Bell. Her traits are Excitable, Loves the Outdoors, Schmoozer, Vegetarian. They share some similar traits, but have slightly different personalities … like most twins I know.

Van decides to host a costume party that evening and places the calls. Then he wakes up the family so they can get ready for a fun morning at the festival.

While there, Conor Ivanov seeks medical attention and Khiara is first on the scene to help him. 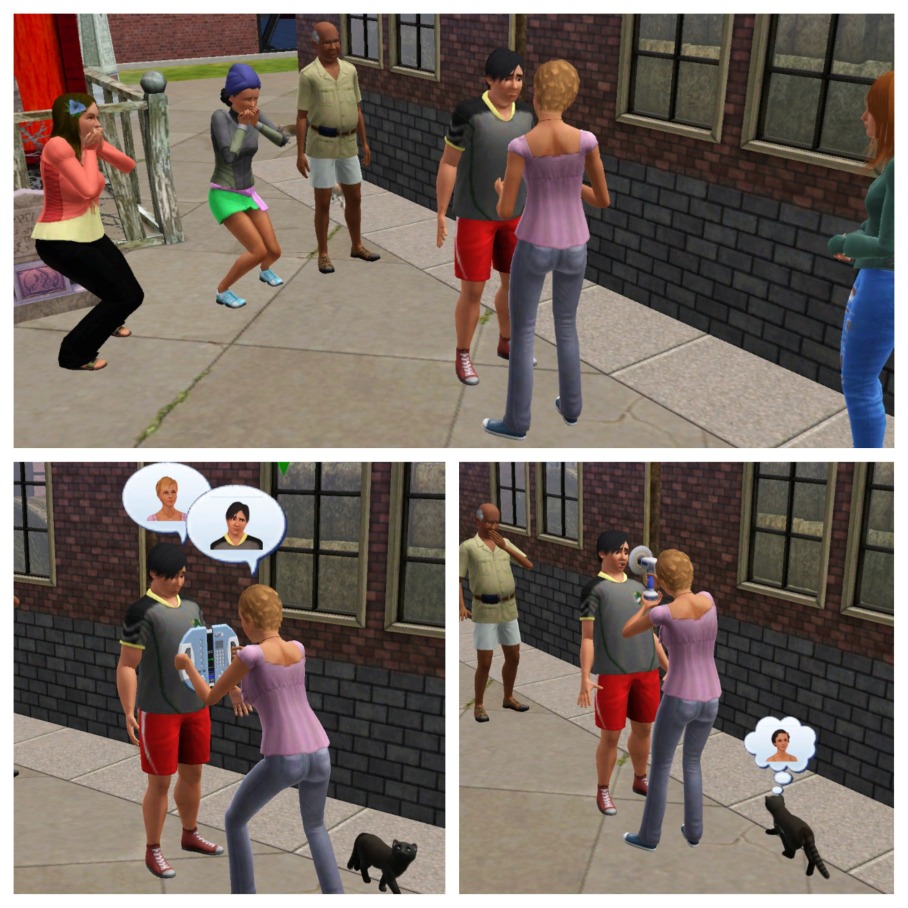 Addy’s Note: Periodically sims receive an offer, while at work, to transfer to another career path and maintain their same level in the job so I figured with Khiara’s experience, she would do the horizontal job shift as well. It didn’t dawn on me (even though I could SEE the job title) that L3 is a Paramedic, meaning she would be able to diagnose and treat other sims. She hasn’t had her first day of work yet. Ha ha ha, oops! Let’s just say the Lab held a lot of safety classes in their ongoing training so she is CPR-certified and such.

Afterwards, Conor grabs her hand and gushes, “It was so lucky that you were nearby when I had that sudden feeling of nausea! Thank you so much!”

The family gathers together and poses for a new portrait before heading home. 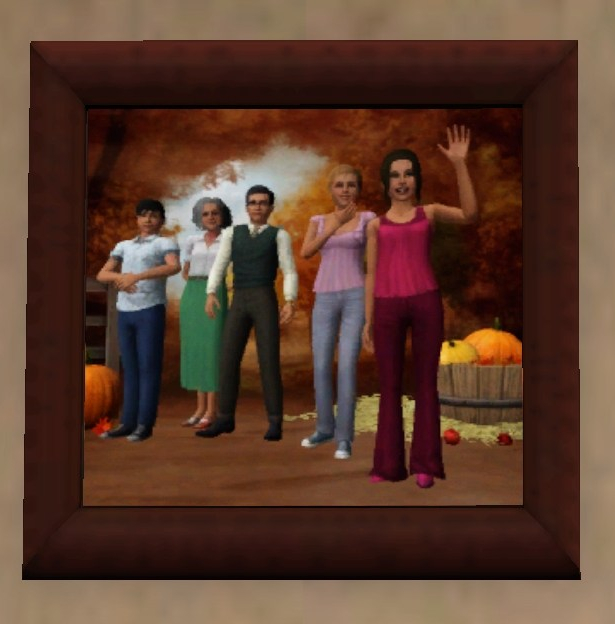 Summer uses her phone and quickly snaps a picture of everyone carving a pumpkin before starting to work on her own.

They look great! Well … most of them. One sim messed up their design, but out of respect for their feelings we won’t mention who it was.

The doorbell rings while Van is gathering ingredients to make a pecan pie. Khiara answers and hides her smile at the creature standing in front of her. “Oh my! An alien has come to visit! I do hope you’re a friendly one.” Receiving an enthusiastic nod in return, Khiara hands the child several pieces of candy. 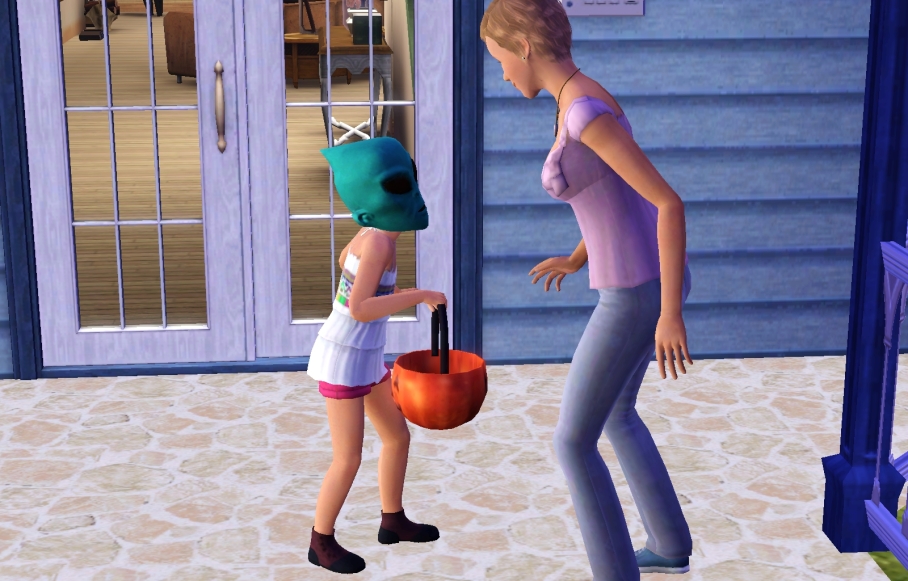 More trick-or-treaters arrive, but none of the invitees have shown up. Van calls each guest and most are now unable to come.
Addy’s Note: Van is a Party Animal and has the LTR of Legendary Host due to his roll of having to host a party each week. This is the first time that invitees failed to arrive.

Bell’s friend, Cliff McCrary, arrives wearing everyday attire. Van and the others follow suit and change out of their costumes so anyone who shows up will feel at ease.

Ben’s friend, Michaela Joy, arrives dressed as a tiger so Ben quickly runs upstairs and dons his costume before greeting her.

Everyone gathers on the dance floor and begin swaying to the spooky music that is playing on WKR-Sims. The radio station is hosting a countdown of the top 20 Spooky Day tunes. MJ’s ‘Scary Smustle’ seems to be a big hit with the teens!

Then everyone heads into the kitchen to replenish their energy with slices of pecan pie and glasses of cold milk.

Michaela is obviously tired and after setting her plate down, runs out the door calling out thank you and saying that she really enjoyed herself.

Addy’s Note: I was quite surprised to see her place her partially eaten plate on the ground and leave as quickly as she did. The others were still eating.

What a gentleman Cliff is! He cleans up his and Bell’s plates.

Unfortunately, he isn’t single. Earlier in the evening, Bell discovers that he is dating Josephine. Michaela also has a boyfriend. No dates for the Winter Dance. Rats!

Even though the Costume Party was a bust, the entire day has been a hit.
Addy’s Note: I plan to count this as a party since Van did everything he was supposed to do on his end.

Previous: Welcome Her Home
Next: Grown Up